In the past, for my grandmother, the only place in Poland that everyone said she was born in was Tarnobrzeg. Now, Tarnobrzeg is a very large area. I sent for her Alien Registration Form that she had to fill out during World War II, since she never became a citizen. The name of the town was not clear, as if the keys on the typewriter were broken. Then, last Summer, I had the idea to send for my Aunt Helen’s form. It took almost six month, but the form came and the town’s name was clear as a bell:  Kajmov! I investigated and found that Kajmov had been absorbed by Miechocin. I now have the Church where my grandmother was most likely born and perhaps married!  http://spuscizna.org/spuscizna/miechocin.html The church of St. Mary Magalene-my middle name! 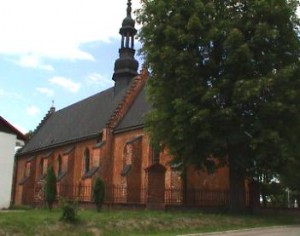