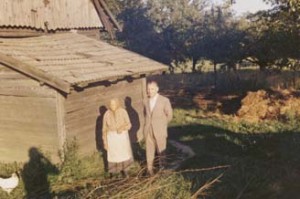 I just realized a connection I’ve had all along but had forgotten about. I was cleaning out some files and found this photo, along with the photo of the tree on the Polish Photos page. I believe this is the same woman, Magdalena Szymanska, that is in the other photo there with the younger woman and two blond boys. I believe she is also the woman in the photo sitting under a tree. This would be my grandmother’s half sister! Along with the photos was a letter from Jan Waszak. He gives his address below, along with the Lokietka address. The letter was dated November 1, 1985. I am wondering if the two sons he mentioned are the ones in the photo, but older.

Part of his letter goes as follows: First, about me. My name is Jan (John) Waszak. My parents live in Wilcza Gora. At the present time I am working as a delegate far away from my parents about 250 km. He also says he has two sons, ages 15 & 17 and is about to remarry. I am hoping one of them will see this and contact me.